Some of you may have noticed the strange structure that appeared on Wrexham Road a couple of weeks ago. 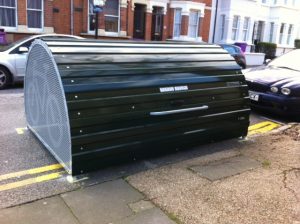 This is a Cyclehoop Bikehangar, a secure bicycle storage unit.

This is part of a council scheme to get more people in the borough to cycle, as laid out in its Cycling Strategy, adopted in January 2016 It aims to increase the proportion of Tower Hamlets residents cycling to work to 15% by 2025: about double the number which do now. As part of this, Tower Hamlets  pledged to significantly increase the level of on-street cycle parking,  including secure, lockable units like these.  The Bikehangar holds up to six cycles, and costs just £60 a year.

To find out more about Cyclehoop, the Bikehangar or to hire a spot for your bicycle, take a look at Cyclehoop’s website. There are also Bikehangars in other parts of Tower Hamlets including Vivian Road,  Mossford Street and Louisa Street.