Rocky the cat, world famous in Bow, has died at the ripe old age of … well, who knows? Aline Reed bids her a fond farewell

Goodbye Rocky, who is now settling in her eternal sunspot over the rainbow bridge, where there’s a moped, recycling bin and smooth, tarmacked road especially reserved for her.

A cat of extreme opinions, Rocky maintained a fierce dislike of animals alongside an absolute devotion to humans. She was a dog-puncher, cat-fighter, rodent-killer and self-appointed neighbourhood watch leader, as well as a champion cuddler, lap-warmer and high volume purr-er.

Right to the end, Rocky pursed her mission to welcome and befriend residents and visitors to our neighbourhood, with a particular focus on Jebb Street (known to some as Rocky Road).

If you’ve lived here long enough, you’ll remember her phase of sitting on the recycling bin on Jebb Street, before upgrading to Kerstin’s moped, which she usuallysat on backwards. There were also the alleyway years. Finally, the middle of the road became her preferred spot to lie down for a sleep.

Like many aging divas, Rocky was reluctant to share her actual age. She had a kitten-like sense of mischief, and only lately showed signs that her 21 or 22 years of lifewere taking their toll.

Next to nothing is known of Rocky’s first five years – except at some point she badly broke some front teeth, and lost the small slip of paper from her collar which recorded her owner’s details.

She was found outside a shop on Green Lanes – skinny, dirty, hungry. She’d convinced the shop owner she was lost and needed food (a skill she later re-used to her advantage). My friend took her home – named her Charlie – and tried to trace the owner via the council, the vet’s and posters around the area. No joy.

‘Charlie’ didn’t mind at all. She liked her new home. But when my friend moved in her with girlfriend a few months later (and more significantly, her girlfriend’s huge lion-like cat), it was time to move on again.

On August Bank Holiday weekend 2005, ‘Charlie’ started her third incarnation in Stoke Newington. Spotted punching a small brown kitten in the face, she became ‘Rocky’. She was soon a regular at the local pub, and was known to pop up to Church Street to meet and greet.

She liked it there, but it wasn’t her spiritual home. That was Bow.

In April 2006, Rocky moved to Ridgdale Street, and found it immediately to her liking. So many open doors and windows and each one an invitation to go in…

That first Christmas, her humans were invited to meet the neighbours at Ceri and Matthew’s. We had never lived in a street where you were invited round for mince pies. I don’t think anyone had a clue who we were. But after a few minutes, the bell rang and in strolled Rocky. ‘Hi Rocky!’ said everyone.

Here are some of the places she ended up:

She went through a period of crossing Bow Road and would be found, opposite the Co-op suspiciously near an open can of tuna.

She also went missing close to fireworks night one year. We looked and we looked. Then, one day, David looked out of the window and saw her staring back at him from the top floor of number 11, which was undergoing refurbishment and wasn’t inhabitedat the time. We were just working out how we could post food through the letterbox to her when someone who had the keys strolled up and let her out. Another of her nine lives used up.

Although Rocky loved children to stroke her, it turned out she disliked babies in her own home, and made alternative arrangements. From around 2013, she left the houseeach morning and made her way to her chosen family at no 14 Jebb Street. There were significant obstacles to overcome – like Liz’s cat allergy – but it wasn’t long before the whole territory was hers. She even had her own chair. For years, the Ricesbrought her home in the evening – sometimes on a cushion if she was sleeping, or under an umbrella if it was raining.
She still found time to visit many other houses, fight any resident cats, steal their food, and snuggle up to their owners.

For Rocky, lockdown was absolutely delightful. Everyone was at home!

More recently, she started crossing Fairfield Road to see her dear friend Carol. And she was absolutely delighted when Susan and Scott opened their cat spa on JebbStreet, where constant pampering was available – even on Christmas Day.

Rocky fell seriously ill in April, but made enough of a recovery to enjoy the Street Party. She continued to demand a walk to Jebb Street every day, even if she needed a few sit-downs before she got there.

She managed another three and half months of being adored. She wanted to live forever but her body gave out.

She spent her last day with both of her families.

Thank you to everyone who made her day by stopping to stroke her, and to all those who opened their door to let her in or who got her out of the road. A particular thank you to her closest friends – you know who you are. The biggest thank you of all to the Rices and to Becky in particular, who has always been able to anticipate Rocky’s needs and give her the most wonderful care.

She was the best cat. 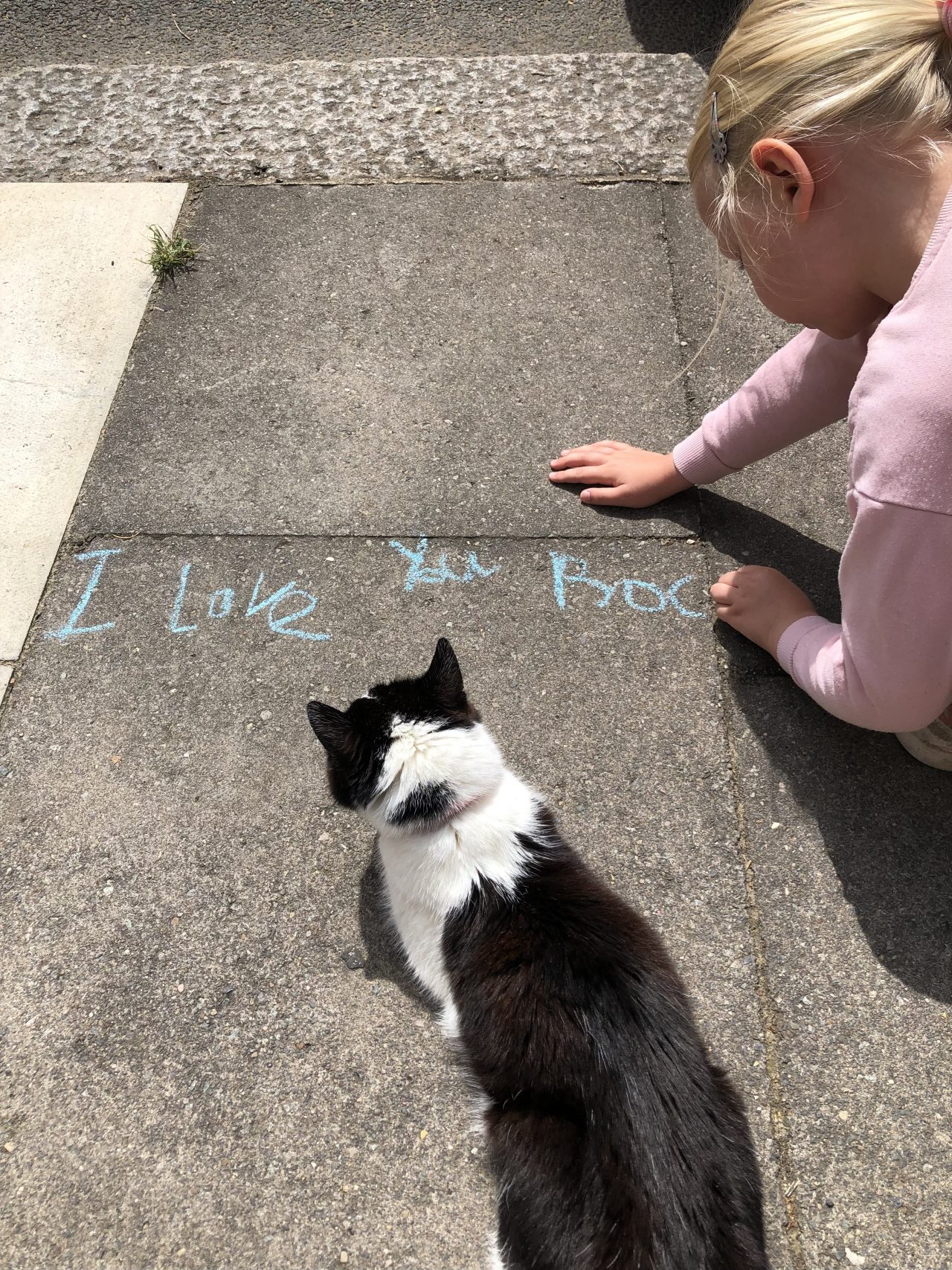